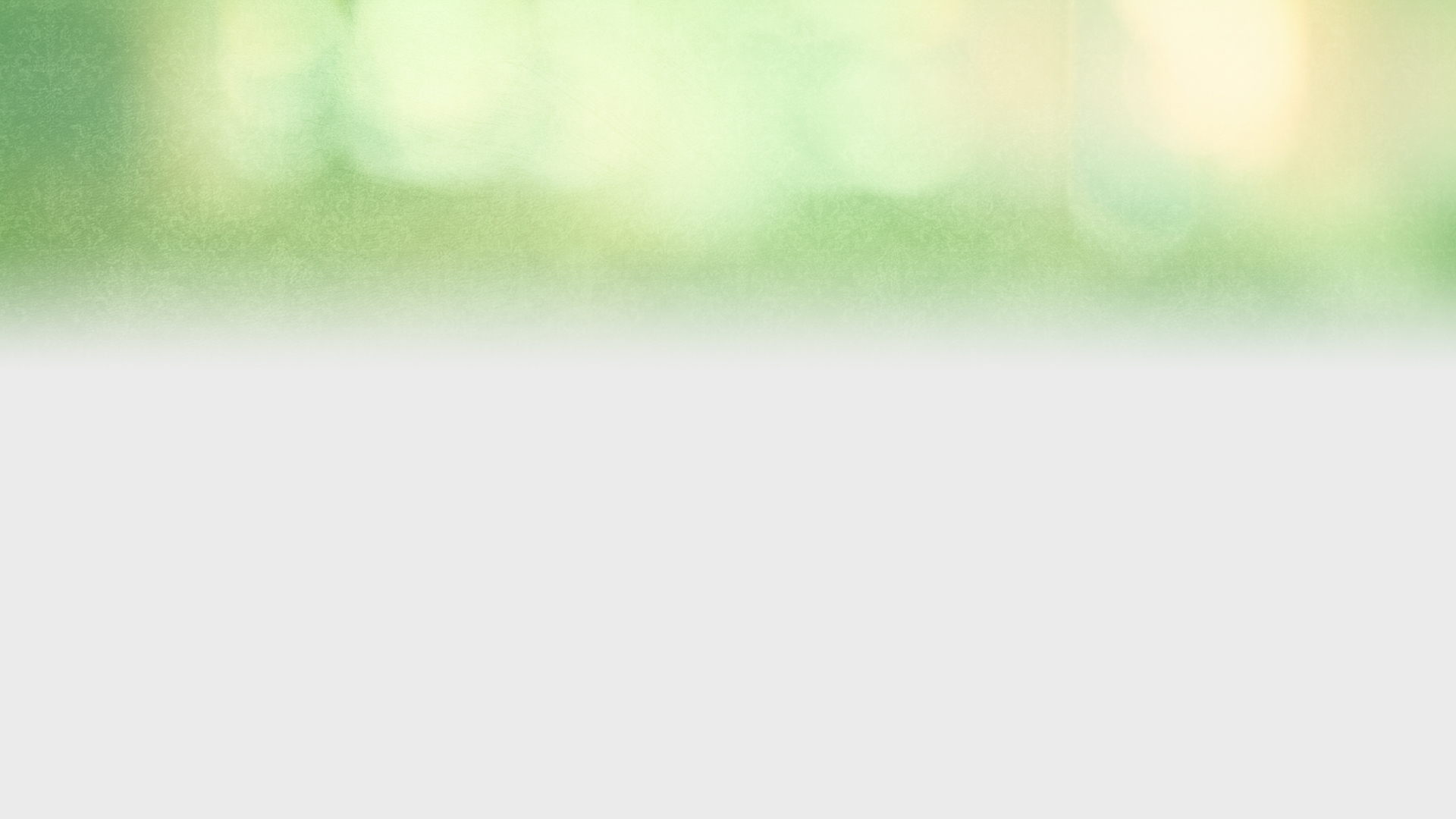 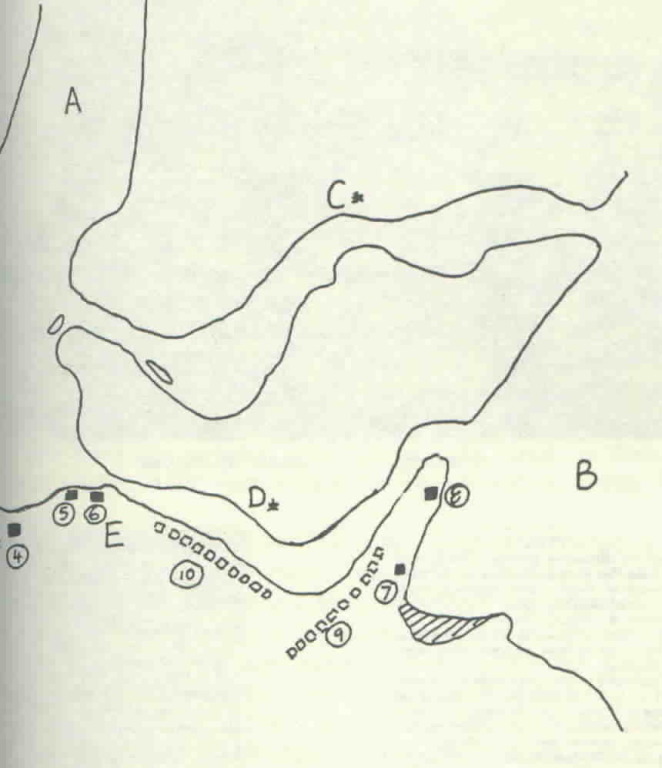 One of the first priests to pass through this area was Rev. Samuel Mazzuchelli. Around 1834, Rev. Theodore J. VandenBroek of Little Chute conducted Catholic services for the benefit of the government employees at Winnebago Rapids. In 1848, St. Malachy Mission was established to serve approximately twenty Catholic families. In 1849, Father Paul Farinacci was assigned to this mission. The exact location of this first Mission and Cemetery has been lost. We do know, however, that it was located on land owned by Patrick Garvey near the edge of the John Fitzgibbon Homestead Farm on Clayton Road. St. Malachy Mission remained in use until 1857. Today a historical marker on the Fitzgibbon Homestead Farm marks the general location of St. Malachy Mission Church and cemetery. 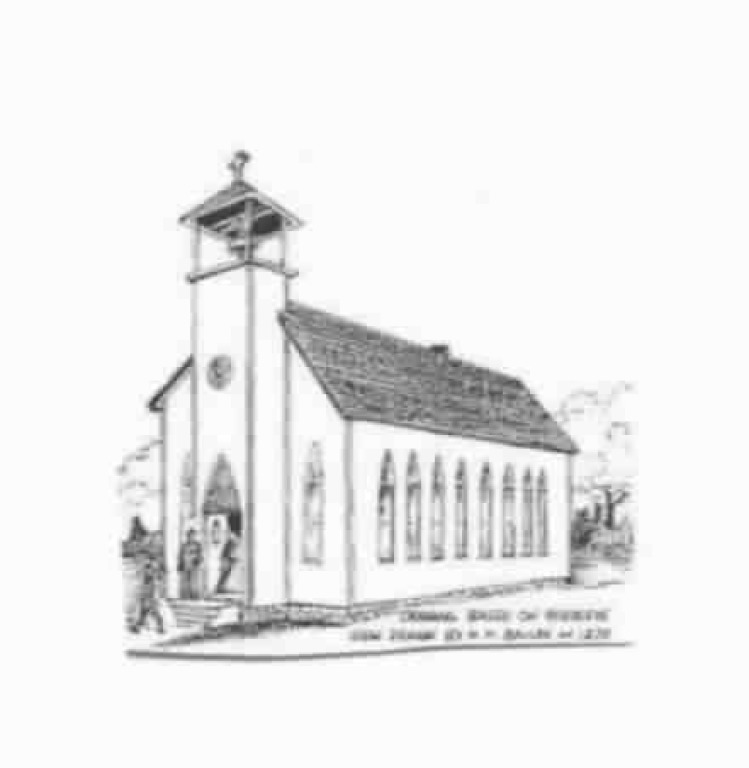 Imagine a rural village with dirt roads, horse-drawn buggies. That is a sample of what life was like for St. Patrick's parishioners in the 1850's. By 1853 Menasha was incorporated as a village. Elisha Smith had opened a dry goods store in Menasha and the Kimberly's built a flour mill. One of the first Wisconsin railroads was in operation in Menasha. Harrison Reed and James Doty built "The Menasha," the largest vessel on Lake Winnebago. And in 1853, encouraged by Rev. F. M. Fusseder, construction began on the first Catholic Church in the newly incorporated village. The Catholic population of Neenah and Menasha was large enough to build a church. However, due to the lack of funds, it took five years to complete. In 1857, Rev. Martin Henni, Bishop of Milwaukee, dedicated the church, which was also referred to as the Catholic Church on the Island, to St. Charles Borromeo.

On August 25, 1860, Captain Laughlin Bellingham MacKinnon and his wife Augusta sold, for $1.00, the land upon which St. Charles Borromeo Church already stood. The following was inscribed in marble over the door of the church The acre of land on which the Church is erected was presented to the Holy Catholic Church by Captain MacKinnon R.M. of England A.D. 1854. At that time eighty families were members of the church.

In 1861, the United States became embroiled in the Civil War. Many St. Charles parishioners served their country. Thirty-three Civil War veterans are buried in St. Patrick's Historic Cemetery (located on a ridge at Green Bay and Ridgeway Roads, Neenah).

By 1867, the congregation had grown to approximately 275 families, with 250 families claiming Irish or German ancestors. Acting on the advice of Bishop Henni, the German-speaking Catholics of Menasha, with the support of those remaining at St. Charles, separated to build their own church. The church was dedicated to St. Mary.

In 1868, the first school was built. Also, in 1868 the Diocese of Green Bay was formed. The Irish and English Sisters of the Order of Servites came to staff the new school. In 1877 they were replaced by the Sisters of Notre Dame. On March 2, 1882, St. Charles Borremeo Church was destroyed by fire. It appears that a defective chimney caused the fire. A considerable amount of property was saved due to the noble effort of local residents.

A New Church, A New Name 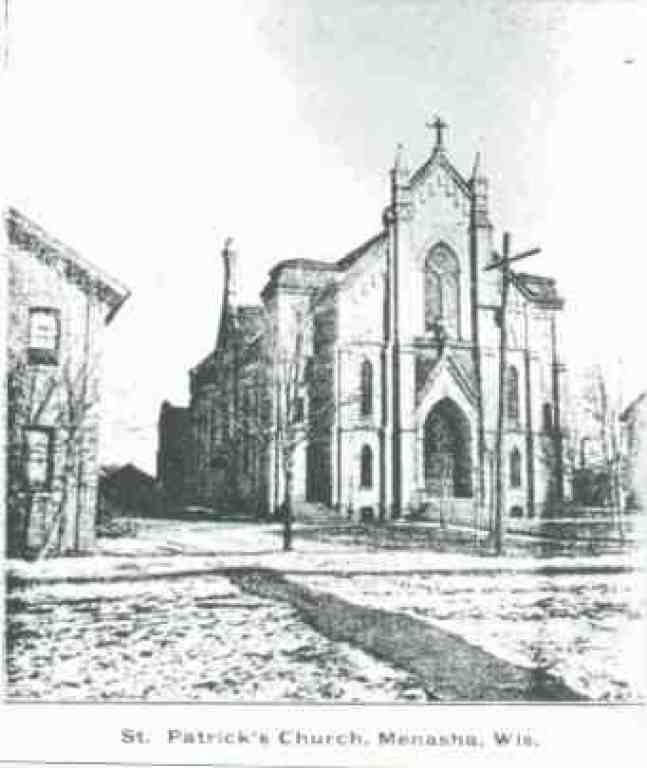 Up to this time, St. Charle Borremeo Church was deeded to the Servites. Many parishioners declined to contribute to the rebuild because the diocese did not own the church. On May 15, 1882, the church and property were redeeded to Bishop Francis Krautbauer and the Diocese of Green Bay. Plans to rebuild commenced and on June 7, 1882, excavation began for our present church. Many parishioners mortgaged their farms and homes to raise money for the rebuilding. The new church was dedicated and named St. Patrick's Congregation on on July 5, 1883. In 1884, Father William DeKalver was assigned pastor of St. Patrick's. He remained in that role until 1915, giving the parish much-needed leadership stability. He served for thirty-one years and remains the longest serving pastor in St. Patrick's history.

In 1889 the parish had a membership of 130 families of mixed nationalities. In 1900 the parish sold the school building to Jersild Knitting Mill. Jersild moved the building one block south and construction of our second school began.

A New Century, a New Look

In 1916, a tower was added to the front of the church. The rationale for this addition is unclear.

In 1932, Bishop Peter Rhode approved a plan to build a Catholic Church in the city of Neenah. St. Margaret-Mary Parish was dedicated on June 11, 1933. Many members of St. Patrick's became original members of this parish named in honor of St. Margaret Mary. In 1939, Father Joseph Ahearn became the pastor of St. Patrick's. Under his guidance, our second school was razed in June 1940, and our last school was dedicated in August, 1941. St. Patrick's continued to be a thriving Catholic community. 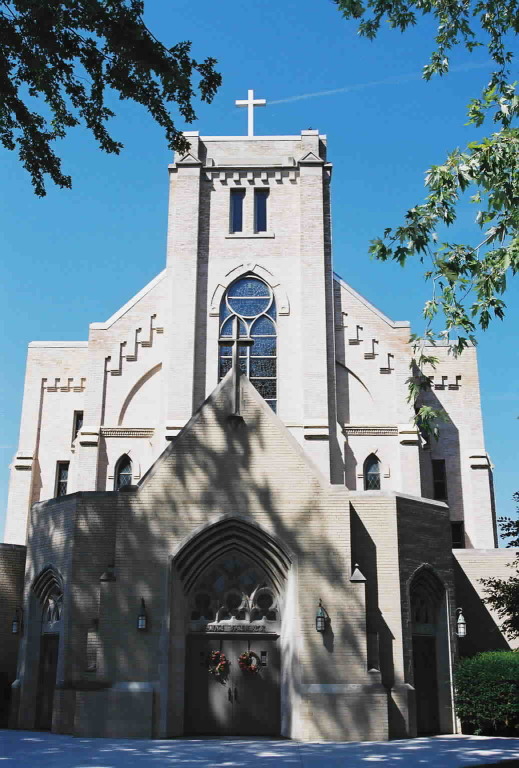 Planned in 1953, remodeling of the church began in 1954 and was completed in time for Christmas Mass. A baptistery was built on the southwest corner of the new narthex. The sanctuary and interior were remodeled to reflect a simpler style. A mosaic mural made of 560,000 pieces of tessaire or colored stones was built behind the altar. The symbolism of the mural depicts the bishop's mitre and crozier in the center. This represents St. Patrick, as does the serpent entwining the Irish Celtic Cross. Other symbols depict position of hands in offering the Mass. New Stations of the Cross and side altar statues were hand-carved by Italian artists. The church was blessed and the cornerstone laid on May 22, 1955. A corpus of the Risen Savior was added later. The bell tower was removed in 1956. In 1961, a new school addition and convent were built. These were the third and fourth major building projects completed during the pastorate of Father Ahearn.

In 1986, Father Roy Geenen became the pastor of St. Patrick's. This was a difficult time to begin a pastorate for at this time the parish made the difficult decision to seek permission from the Diocese of Green Bay to close St. Patrick's Grade School. The school had been a integral part of the parish for 119 years. The building re-opened in 1989 to house Seton Catholic Middle School.

On September 12, 1998, the Catholic Communities of St. Patrick's, St. Mary, St. John, St. Margaret Mary and St. Gabriel Parishes gathered at St. Mary Central High School to commemorate the sesquicentennial of St. Malachy Mission, and to celebrate 150 years of Catholicism in the Twin Cities. Bishops Robert Banks, Bishop Aloysius Wycislo, and the pastors of the five Catholic Parishes concelebrated the mass. This celebration was due to the research done by Dr. Sylvia Martin. Dr. Martin moved to the area and purchased the John Fitzgibbon homestead. Her studies gave us a well-researched and corrected history of the St. Malachy Mission and the early history of St. Patrick's Catholic Community. We are forever grateful.

Preserving Our Heritage, Building Our Future, Celebrating Our Parish Campaign

Father Geenen assembled a long-term planning committee to study the needs of St. Patrick's Parish. This committee planted the seed for our future renovation. In 1998, this long-term plan was put into action. A capital campaign committee was established to oversee the renovation of our church and building of a social hall, kitchen and gathering area. The primary goals of this committee were to make our church accessible to all, and to establish a reserve-maintenance fund to ensure the long-term needs of our buildings and finally to complete the project debt-free. The Preserving Our Heritage, Building Our Future, Celebrating Our Parish campaign was born in October, 1998. Groundbreaking took place on April 21, 2002.

On June 30, 2002 the last mass was celebrated in the yet-to-be-renovated church. As during the 1953 renovation, weekend liturgies were held in the school gymnasium. On October 19, 2002, Bishop Robert Banks dedicated the renovated church and new building. The total renovation and rebuilding project was extensive. In the church proper, it included removing the side altars, replacing the front altar and ambo, replacing the carpeting and flooring, bringing the altar forward, removing the confessionals, enlarging the Liturgy of the Word for Children Room, adding a Reconciliation Room, placing a statue of the Christ Child between the statues of Joseph and Mary, replacing the sound and electrical systems and adding air conditioning. The building project included accessible rest rooms, a full-service kitchen, a social hall (named Geenen Hall in 2006), and Gathering Area. All of the stained glass that was removed from church was adapted and placed in the Gathering Area.

In 2016, under the direction of Pastoral Leader Mary Krueger, work began to raze the former St. Patrick's (Seton) school building. Artifacts, including the Chapel stained glass windows, crucifixes, indoor statues, cement St. Patrick's statue, and cornerstone were removed and were or will be placed in parish buildings or on the new parish green space.

The earliest Neenah-Menasha Catholic graveyard was located along Clayton Road in the Irish Colony. It was associated with St. Malachy Mission Church (1849-1857), a log church located somwhere on farmland that was owned by the Kruse family. There are no remaining markers and the exact location and who is buried there is unknown. There is a State Historic Marker on Clayton Road to commemorate the cemetery.

In earlier years St. Patrick's Cemetery was referred to as the Old Irish Cemetery. This small cemetery is where the Irish Catholic pioneers, and later the German Catholic settlers, are buried. It is located on a ridge at Green Bay and Ridgeway Roads in Neenah. Winnebago County land records identify Archibald Caldwell as the first property owner in the area where the cemetery is located. However, he quickly sold this land to W. Bennett who then sold it to John Stout. These three transaction all took place in the span of two years, 1847-49. James Lomas (later spelled Loomis) and his wife Margaret Beatley purchased the 160 acre quarter section from Stout and remained owners until 1858. The area was already in use as a burial site as evidenced by John Hunt's marker dated 1830-1854 and others from 1856. By 1858, James Loomis sold the land to Henry and Mary Hewitt.

On September 30, 1858, Michael Hogan, who owned a 120-acre farm in the Irish settlement, purchased three acres from the Hewitts. From this time on, all sales of land in this original 160 acre quarter included the phrase except cemetery. On September 3, 1870, he sold the three acres to James Conlan, Wiliam Robinson, and Michael O'Brien. trustees of the Catholic Church on the Island (to be called St. Charles Borromeo, then St. Patrick's) for $300.00. In 1872, St. Charles Borromeo Parish sold the cemetery to the Bishop of Green Bay for $300.00. Here are two links link to WIGenWeb Project which has many pictures of stones St. Patrick's Cemetery. WIGenWeb Project and FindAGrave

On October 6 1913, Frank J. Sensenbrenner sold 11.5 acres of land for $1.00 to St. Patrick's Congregation for a cemetery. The land was conveyed and the name of the cemetery shall forever remain St. Margaret's. Initially, the lots could be purchased by any practicing Catholic, but particlularly members of St. Patrick's, St. Mary and St. John Congregations. A Board of Trustees was established to include five members of St. Patrick's, one male descendant of the Sensennbrener family and one member from St. John and one member from St. Mary Parishes.

Here are links if you are searching for a gravesite at Oakhill Cemetery or Resthaven Cemetery.